The first Bishop’s Castle Town Council Civic Awards were launched by Mayor Karen Bavastock in 2015 and an award ceremony was held in the council chamber in September.  The awards proved to be very popular and it is hoped they will continue to be awarded in recognition of  public service every year. 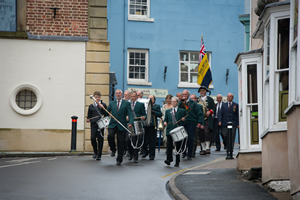 In the spring of every year, Bishop’s Castle’s 12 Town Councillors elect the mayor for the forthcoming 12 months in a public ceremony called Mayor Making. The deputy mayor is also elected.
The occasion, mirrored by other towns all over the country, is the formal annual meeting of the council.
The newly elected mayor and deputy leave the Council Chamber to be robed and their return is announced by the Town Crier.

The council’s maces and pikes are on display. After the mayor’s speech, it is traditional for him or her to invite everyone present to adjourn for refreshments.

Mayor’s Sunday in Bishop’s Castle is the traditional celebration of the newly elected mayor and usually involved a morning parade to St. John the Baptist Parish Church led by the town’s Drum and Bugle Band.
The mayor, councillors and their guests are accompanied by the council’s mace & pike bearers, town crier and the local uniformed groups with their standards. After the church service, parade returns to the Town Hall.